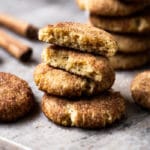 Perfectly soft, lightly tangy and ultra cinnamon-y! Some recipes translate outstandingly well into their gluten free and low carb counterparts, and these keto snickerdoodle cookies fall right in that category!

Oh, and if baking with cups rather than grams is your thing, just click on US Cups for an instant conversion.

Perhaps surprisingly, getting the sweetener right for these keto snickerdoodles is even more important than the flours. You’ve got a few options though.

Keep in mind (!!) that with allulose and xylitol, your cookies will spread much more. So you might not want to pre-flatten them before baking, and I always suggest you do a test run with one (as even from brand to brand, differences can be quite big). And also keep in mind that your cookies will take much longer to set (popping them in the freezer once cool speeds this up though).

And if using xylitol, make sure to be careful if you have a pup around the house, as it’s highly toxic to the little guys!

How much sweetener? I prefer to use 1/3 cup of erythritol as opposed to the traditional 3/4 cup. This lessens the cooling effect and keeps them lightly sweetened. I then give them a light roll in the cinnamon 'sugar' with allulose, which has no aftertaste for me once the cinnamon is in.

Oh! And it might just be me over-analyzing things (shocker!), but I found that erythritol version gave me no cooling aftertaste while the cookies were warm (so fresh from the oven or rewarmed slightly).